Why Mayo Came So Close...and Why They Didn't Win 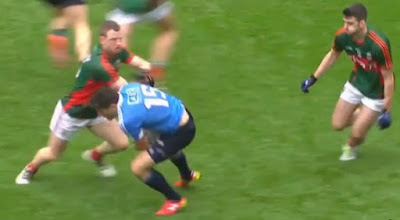 In my preview to Sunday's All-Ireland football final between Dublin and Mayo I had suggested that it seemed unlikely to me that Dublin were as far ahead of Mayo as was the general perception, and that being almost 3/1 on favourites flattered them somewhat. This was based on the fact that in Dublin's four championship games against Mayo and Kerry in the last two seasons, despite attacking phenomenally, that there had been some striking pattern relating to defending and how they fared when they couldn't get their kick-out off quickly.

Read full article over at Grassroots GAA: http://www.grassroots-gaa.com/why-mayo-came-so-close-and-why-they-didnt-win/
Posted by Unknown at 12:47 PM